Every room at the Doupiani House has been carefully

and with respect to the traditional architecture of Meteora.

Relax in our amazing garden enjoying your drinks

with the unique views of the Meteora rocks.

THE BALCONY OF METEORA

Enjoy the most panoramic view of the Meteora

rocks in the entire area. A unique experience that

you will never forget.

in its amazing garden enjoying the breathtaking

views of the Meteora Rocks.

Sit back with a glass of something special in the

your drinks in our much-loved fireplace.

All of these monasteries are located at Meteora in Greece, and most are perched on high cliffs and accessible by staircases cut into the rock formations. They were created to serve monks and nuns following the teachings of the Greek Orthodox Church. Much of the architecture of these buildings is Athonite in origin. 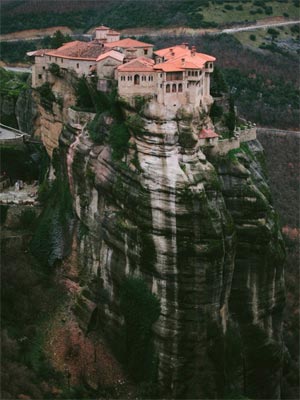 The Holy Monastery of Great Meteoron – This is the largest of the monasteries located at Meteora. It was erected in the mid-14th century AD and was the subject of restoration and embellishment projects in 1483 and 1552. The building serves as the main museum for tourists. The Katholikon (main church), consecrated in honour of the Transfiguration of Jesus was erected in the middle of 14th c. and 1387/88 and decorated in 1483 and 1552.[10]

The Holy Monastery of Varlaam – The Holy Monastery of Varlaam is the second largest monastery in the Meteora complex. It was built in 1541 and embellished in 1548. A church, dedicated to the Three Bishops, is in the Athonite type (cross-in-square with dome and choirs), with spacious esonarthex is surrounded by a dome. It was built in 1541/42 and decorated in 1548, while the esonarthex was decorated in 1566. The old refectory is used as a museum while North of the Church we can see the parekklesion of the Three Bishops built in 1627 and decorated in 1637.

The Holy Monastery of Rousanou/St. Barbara - This was founded in the middle of 16th century AD and decorated in 1560.

The Holy Monastery of St. Nicholas Anapausas - Built in the 16th century AD, this is a small church. It was decorated by the Cretan painter Theophanis Strelitzas, in 1527.

The Holy Monastery of St. Stephen - This small church was built in the 16th century and decorated in 1545. This monastery rests on the plain rather than on a cliff. It was damaged by the Nazis during WWII who believed it was harboring insurgents. It was abandoned. Nuns took it over and reconstructed it.